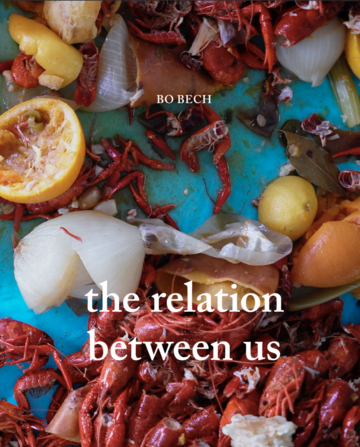 What’s the USP? Travelogue meets photography portfolio meets philosophy tract meets recipe book (it’s complicated) with the aim of illustrating that ‘we are closer to each other than we think’.

Who is the author? Danish chef Bo Bech (the surname is pronounced ‘Beck’) made his name with his avant garde cooking at the Michelin-starred Paustian in Copenhagen in the early 2000’s and then opened the more casual Geist in 2011 which he left in 2020. He has appeared on a number of food TV programmes in Denmark and is also the author of ‘What Does Memory Taste Like’ and ‘In My Blood‘. At the time of writing, regarding Bech’s future plans, the bio on his website simply says ‘watch this space’.

Is it good bedtime reading? The majority of the book’s 368 pages are taken up with Bech’s travel photography, but there are also 20 vignettes where Bech ponders subjects such as the conflict between homesickness and wanderlust, the pursuit of the perfect restaurant, how to properly prepare to cook, a life changing meal and the correct kitchen technique.

How annoyingly vague are the recipes? Although the book lists 37 recipes, all with one word titles such as ‘avocado’, ‘pasta’, ‘scallops’ and ‘waffles’, there are no recipes in the book. At least, not what we think of as traditionally formatted recipes with a list of ingredients with weights and measures followed by a detailed method. Imagine being in a room with Bech, or on the phone with him. You’re discussing food and every so often in the conversation he’ll describe how to cook something. That’s what the recipes in The Relation Between Us are like. Many do include measurements but so don’t. You have to go with the flow.

Will I have trouble finding the ingredients? The recipes mostly concern common, easily available items that you’ll be able to find in the supermarket, online or at your butcher, fishmonger or deli. But as Bech says in his introduction, ‘Instead of handing you a a strict recipe to dutifully follow I’m giving you a suggestion for how to best begin your food journey’ so there’s lots of leeway to interpret the dishes and use what’s easily available.

What’s the faff factor? Given the conversation style of the recipes, they are, generally speaking, simple dishes that can be easily explained and executed. Some methods, like pot roasting cauliflower or slowly caramelising pineapple, will take time and attention, but this is food to be made and enjoyed rather than messed around with.

How often will I cook from the book? This is probably not a book you’ll be reaching for every day of the week, but there are plenty of dishes such as baked risotto rice flavoured with lime, soy, ginger, honey and sesame oil that will earn a place in your repertoire and that you will return to often.

What will I love? As previously mentioned, the big draw is Bech’s photographs that draw on a decade of global travels and represent Bech’s ‘peak experiences’ in locations as diverse as Nashville, Colombia, Tokyo, New Orleans, Copenhagen, Montreal, Sichuan, Saint Petersburgh, Bangkok, Cuba and the Faroe Islands (as well as many more). Often the shots are food related, taken in markets and restaurants. They may be of Bech’s fellow star chefs including Sean Brock and Daniel Boulud, or they may be of street food vendors or just local inhabitants. Bech has an eye for colour, composition and an interesting face which makes browsing the book a visual feast.

What won’t I like so much? You may find the format of the recipes off putting, although I personally found them charming and full of character and personality.

Should I buy it? Although it shares similar ideals with Rene Redzepi’s You and I Eat the Same, The Relation Between Us is a genuine one off, much like it’s larger than life author. In a time when few of us can travel much further than the local supermarket, joining in on Bech’s global gastronomic adventures, albeit from the comfort of your living room, is a real treat.

Buy this book
The Relation Between Us
£43, Bo Bech