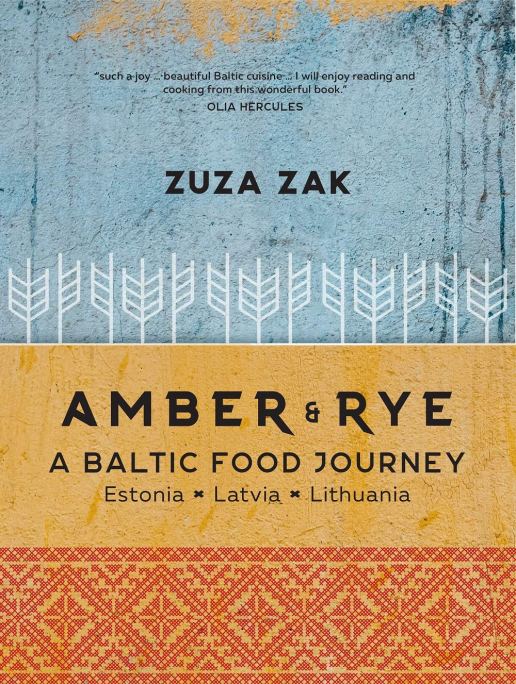 What’s the USP? Touching on the cuisines of Estonia, Latvia and Lithuania, Amber & Rye seeks to open up the food of the Baltic nations to chumps like you and me, who are frequently a little embarrassed by how little we know about the area.

Who wrote it? Zuza Zak is something of an expert is Eastern European cooking. Her first book, Polska, was something of a hit in 2016 and explored the food of Poland, where she spent the first 18 years of her life. Now she’s back looking at the foods of the three states that border the Baltic Sea to the north.

Incidentally, and perhaps unsurprisingly given her early life in Communist Poland and close ties across the region, Zak is one of the many prominent voices in the food industry speaking out about Ukraine, and Russia’s illegal war on the nation. Like fellow food writer Olia Hercules (@oliahercules), her Instagram (@zuzazakcooks) is currently a great source of valuable resources as well as celebrations of Ukraine’s rich food traditions.

Is it good bedtime reading? Zak is a self-described ‘storyteller cook’, which sounds impractical to a ‘podcast-listening cook’ like myself. But sure, whatever floats your boat. It does mean that the book has a touch more to read than most cookbooks – though I’d have been interested to discover even more than offered here.

As well as brief chapter introductions and slightly more substantial lead-ins to each recipe, the book has an extended opening chapter exploring Zak’s own history and experiences with the region. Best of all are five sections offering short food-led looks at five of the major cities across the three nations.

How annoyingly vague are the recipes? No complaints at all. Instructions are clear and, best of all, measurements are given in both metric and imperial measurements. A book for your child, a book for your grandparents! Perfection.

Will I have trouble finding the ingredients? Like so much of the cuisines in mainland Europe, the ingredients called for are recognisable and easy to source. They lean towards the heartier end of the spectrum, which is no real surprise. So plenty of lentils, root vegetables and salt (there’s a whole chapter on the various preservation techniques of the region).

How often will I cook from the book? This may be a personal bias, but Amber & Rye strikes me as a book that will spend most of the summer gathering dust on your bookshelf before making plenty of appearances as the days draw in and we you rediscover the joys of homemade soups, or the warming hold sauerkraut has over you. There are exceptions, of course – a beetroot-loaded Springtime Millet ‘Risotto’, or a colourful Crayfish Salad From a Lithuanian Lagoon. But for the most part, this is a book for the colder months.

Killer recipes: The wild garlic is starting to emerge, so I’d be a fool to ignore either the Wild Garlic Hummus or the Fermented Wild Garlic & Buckwheat Soup. For those less inclined to forage, why not try Cepelinai Potato Dumplings with Lentils and Lovage, or the cosy Baltic Mash with Barley?

Should I buy it? Zuza Zak’s book is a well-written exploration of three nations, and is filled with comfort-heavy dishes that will keep you warm until spring becomes a little more convincing. For those looking to discover the Baltic cuisines, or just add an arsenal of flavoursome (and often quite purple) soups to their repertoire, this is a worthwhile purchase.

This book was longlisted for the Andre Simon Award 2021. Read more here.

One thought on “Amber and Rye by Zuza Zak”