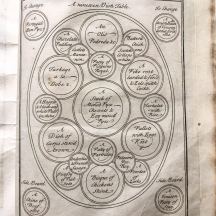 Long before chefs began coveting stars, their reputations were built on the social standing of their patron. The bigger the ‘nob’ you worked for, the more prestige your position as a chef held in the 18th century. Charles Carter’s patrons included the Duke of Argyll, General Wood and several lords. He had the advantage of having working in several European countries where he had been exposed to a wider variety of flavours (like garlic) than many of his English counterparts. He was very proud of his achievements and doesn’t shy away from telling the reader so in the introduction to The Complete Practical Cook (1730).

Despite his lack of modesty, a lot of what Carter says still holds true today. He believes cookery is an art and that good cooks should be rewarded for their skill. He is highly critical of unscrupulous cooks who pass off other’s work as their own. He even starts the book by extolling the virtues of a good stock, a maxim which is as true now as it was in the 18th century.

The recipes are very much of their time, with many many meat-based dishes beloved by his wealthy benefactors. Nose to tail eating was definitely the order of the day. The recipe for Olio Podreda (a type of Spanish stew) contains 11 breeds of bird including pheasants, ducks and larks plus beef, pork, veal and mutton, not to mention hogs ears, trotters, sausages and ham. The dish is served with a ‘ragout’ of pallets, sweetbreads, lamb stones, cockscombs and a hefty dose of truffles. You get the meat sweats just by reading the recipe.

A few recipes, like To Pot Otter, Badger or Young Bear, are decidedly odd and are likely to offend some 21st century sensibilities. However, others like Buttered Crab, Eggs à la Switz (a spiced up version of eggs florentine), Pike Babacu’d or Beef la Tremblour (slow cooked rump or sirloin ‘till it is so tender that it will tremble or shake like a quaking pudding’) sound reassuringly familiar once you get past the archaic language. Some like Tamarind Tort or Caraway Cakes are crying out to be rediscovered by a modern audience. Unlike modern cookery books there is no strict division between savoury and sweet dishes reflecting the way meals were served à la francaise. Carter even provides a number of diagrams at the back of the book with suggestions for different dinners according to the season or occasion.

Clearly for the 21st century cook, this is far from a practical book. The recipes are designed to cater for large households so inevitably require scaling down. Some of the ingredients he uses, like eringo roots (candied sea holly roots) or ambergris (whale vomit) are difficult to come by or are best avoided. Carter claims this book will make cooks more inventive and a certain degree of ingenuity is required to make these recipes work today. If you have any interest in England’s culinary heritage it’s worth persevering with The Complete Practical Cook if for no other reason than to prevent it from being forgotten.

SAM BILTON
Sam is a food blogger at comfortablyhungry.com with a keen interest in food history. She also runs a historically themed supper club called Repast.