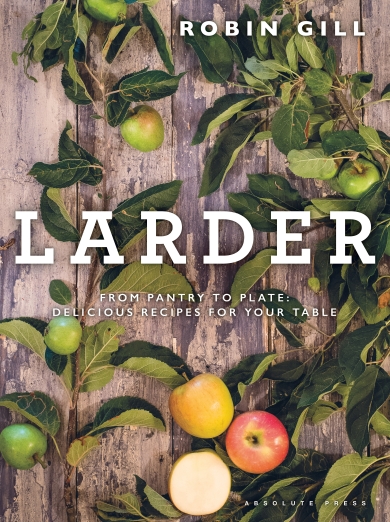 What’s the USP? An urban update on traditional larder-driven cooking based around fermentation, curing, pickling, flavoured butters and oils, stocks, sauces and seasonings.

Who’s the author? Irish-born, London-based chef Robin Gill has revitalized the capital’s dining scene with his distinctive take on top drawer cooking set in casual surroundings at The Diary, Counter Culture and Sorella, all in Clapham.

What does it look like? There’s a distinctly rustic feel to the whole thing with matt finish pages, pictures of Gill on the farm, by the shore or posing with a brace of rabbits and food plated on vintage or earthenware crockery. I wouldn’t want to utter that overused and lazy term ‘hipster’, but you get the idea.

Is it good bedtime reading? Although first and foremost a recipe book, there is plenty of food writing to enjoy in the form of substantial recipe introductions, producer profiles and general musings on cooking techniques and ingredients. The autobiographical introduction provides a fascinating, and at times troubling, look behind the scenes of the restaurant industry.

Will I have trouble finding ingredients?  Cod collars, pig’s head, buffalo milk, Baron Bigod cheese, chardonnay vinegar, espelette pepper and dried wakame mean that you’ll have to look further than your local Tesco for many of the recipes.

What’s the faff factor? Don’t be fooled by the rustic vibe; Gill has worked in some very serious kitchens and although the food is presented in a naturalist way, there’s often lots of work gone into making it all look laid back and simple.

How often will I cook from the book? Because many of the dishes rely on larder recipes (the hint’s in the title) some of which take days, weeks, months or even a year before they are ready, this is more a culinary philosophy that you need to buy into than recipe a book that you can easily dip in and out of.

What will I love? The extended larder section provides a real insight into Gill’s style of cooking so you get a real sense of what makes his restaurants so different and special. There is also an excellent selection of inventive cocktails including Panic! At The Pisco made with pisco, white vermouth and rhubarb puree and even a recipe for homemade pumpkin beer.

What won’t I like? The lack of quick and easy dishes. But there’s more than enough of those sort of books knocking about already if that’s more your thing.

Should I buy it? If you want to learn the techniques behind contemporary British restaurant cooking and employ them in your own home (or your own gaff if you’re a chef) this is an essential purchase.

Buy this book
Larder: From pantry to plate – delicious recipes for your table

3 thoughts on “Larder by Robin Gill”