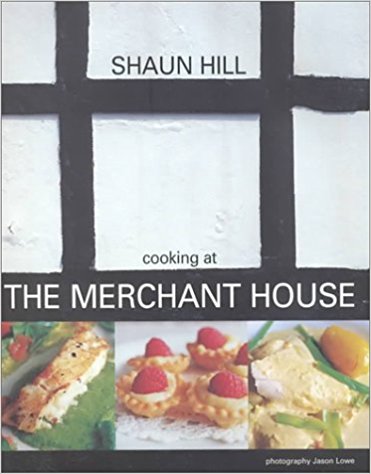 There had been a ten year gap between The Shaun Hill Cookery Book (also known as The Gidliegh Park Cookbook) and Cooking At The Merchant House when it finally arrived in 2000. In between, Hill had knocked out a vegetable cook booklet for the BBC, contributed recipes to “A Spoon At Every Course by Mirabel Osler, and apparently spent the advance for a book called Masterclass which eventually surfaced as How to Cook Better.

Of course, he was also busy doing other things, such as running a restaurant, consulting for BA and Tescos and the odd bit of broadcasting on Radio 4. But I’m extremely glad he took the time to record the recipes that formed the menus at his wonderful and late lamented Ludlow restaurant.

Dishes such as Warm Artichoke Heart with Peas and Mint Hollandaise; Fresh Goats Cheese Gnocchi and Lobster with Chickpea, Corinander and Olive Oil Sauce bring back fond memories of numerous meals eaten at The Merchant House.

In addition to the excellent recipes, Cooking At The Merchant House goes some way to telling the story of the life of the restaurant.  Hill is a gifted writer of prose and it’s a great shame that there is not more of it. I am told by ‘sources close to the author’ that a great deal more was written and submitted, but was sacrificed to photos and general design considerations. Nevertheless Cooking From the Merchant House remains an essential purchase for any serious cook, professional or amateur.

Buy this book
Cooking at the Merchant House