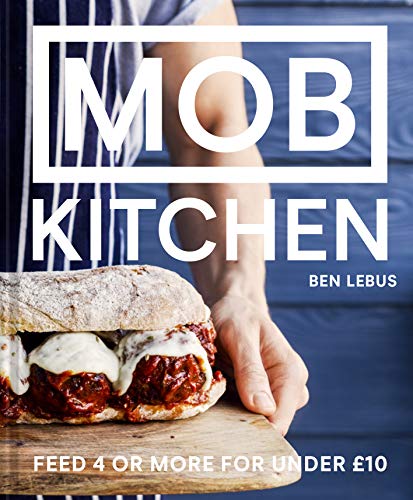 What’s the USP? Quick and easy recipes that will feed four people for less than a tenner, this is the print version of the youtube and social media food channel.

Who’s the author? Ben Lebus previously worked as a waiter in his father’s Oxford restaurant and as a Deliveroo rider before launching Mob Kitchen, an online publishing company that creates short cooking videos.

What does it look like? The vivid, direct, colourful and simple design makes it a pleasure to cook from.

Is it good bedtime reading? In a word, no. But it is good listening, sort of. Every chapter and recipe comes with its own soundtrack. Just scan the Spotify code using the app on your phone and you can hear Bon Temps Rouler by Scoundrels while you knock up some Healthy Chicken Gyros.

Will I have trouble finding ingredients? The book is pretty much aimed at the supermarket shopper so you should have no problems finding anything.

What’s the faff factor? Lebus doesn’t understand the word ‘faff’. As he explains in his introduction, Mob Kitchen is all about weaning uni students and young professionals off their fast food and takeaway habits and showing that ‘cooking healthy, delicious food is easy, fun and affordable’.

How often will I cook from the book? If you are a uni student or young professional and you do want to eat more healthily, cooking from Mob kitchen could become a daily habit. And even if you don’t fall into the above categories, the book has plenty of mid-week meal ideas to appeal to casual cooks and dedicated culinarians alike.

What will I love? The sense of discovery and joy in sharing knowledge and the fact that the dishes really will only cost you ten quid to cook.

What won’t I like? If the book was a person it would live in Shoreditch, call you ‘buddy’ and have a thing for craft beer. There is a certain amount of twenty-something testosterone (and which is also very evident on the videos) which some readers may find hard to swallow.

Should I buy it? As a first cookbook for a younger person, you can’t really go wrong but also well worth investigating if you’re short on time to cook and are bored by your  weekday meal routine.

Buy this book
Mob Kitchen: Feed 4 or more for under 10 pounds