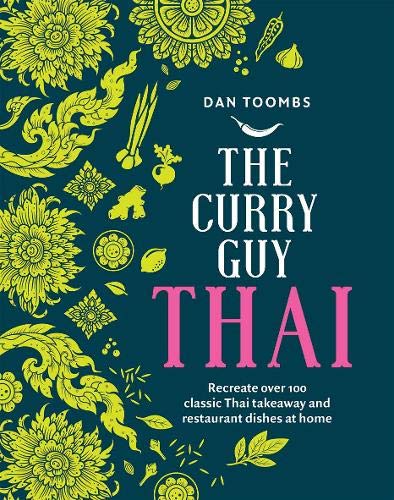 What’s the USP? An introduction to Thai cooking, The Curry Guy Thai seeks to show readers how to recreate their favourite Thai takeaway recipes at home.

Who wrote it? Dan Toombs, the self-styled ‘Curry Guy’ of the title. The Californian crossed the Atlantic to settle in the UK way back in 1993, and has been something of an obsessive since discovering our nation’s fabulous curry tradition. After starting a curry recipe blog in 2010, Toombs’ popularity began to rise – and his work ethic no doubt has something to do with that. The Curry Guy Thai is his seventh book. His first, The Curry Guy, came out just four years ago.

Is it good bedtime reading? Toombs enjoys giving context to each recipe through relatively detailed introductions, but there isn’t much to keep you entertained beyond those. It would have been nice to see some lengthier chapter introductions that explored the different aspects of Thai food. The country’s cuisine has exploded in popularity of the past few years, and whilst it is available on a much wider level than that of other Southeast Asian nations, there is still plenty of education to offered to a nation who still don’t really understand the difference between green and red curries (it is not, Toombs notes, the spice levels).

What’s the faff factor? This was my first foray into the Curry Guy series and, having seen them all over the cookbook sections for the last few years, I was surprised by certain things. With the mass market publication Toombs’ books have received, their relatively low price (this title has an RRP of £15), and their lack of physical heft (around 150 pages here), I had assumed Toombs was putting out quick recipes that could offer busy families a way to enjoy a semi-authentic takeaway-style dish on a weekday night.

In reality, The Curry Guy Thai offers an earnest attempt at authenticity wherever possible. This is great, in theory – a genuine way to explore Thai cooking at home and capture the flavour of a good takeaway or even restaurant dish. Unfortunately this also means committing yourself to a little more time and effort.

Ingredients lists are pretty long, and frequently stretch beyond the local supermarket shelves, asking you to seek out galangal or lime leaves. With the focus more on true replication than home cooking, Toombs offers recipes that require deep frying when perhaps a shallow fry or oven-based alternative might have been more practical for the reader.

Is it the best way to explore Thai cooking then? The problem quickly becomes that of the competition. It’s been two years since Kay Plunkett-Hogge put out Baan, which has quickly become the benchmark for Thai cookbooks in the UK. That one might have been marketed a little more squarely at enthusiastic hobby cooks, but in truth it outperforms The Curry Guy Thai in every field – more authentic, easier recipes and much more practical for regular weeknight dinners.

There are options to save your energy – allowances for the use of ready made curry pastes instead of the time-consuming homemade version – but when I tried these within the context of the recipes I found them underwhelming.

What will I love? The book does a good job at collecting all of your favourite takeaway dishes, meaning you’ll be able to put together a Thai feast of your own if you ever want to.

What won’t I love? Very few of the recipes are as quick and easy as you’d like, so that Thai feast is going to be quite a bit of work.

Should I buy it? If you’re a fan of the existing Curry Guy books, this will fit in perfectly on your shelf and offer more of the same stylistically whilst expanding the canon into Thailand. Otherwise, maybe take a moment to explore the other options before committing to this fairly middle-of-the-road cookbook.