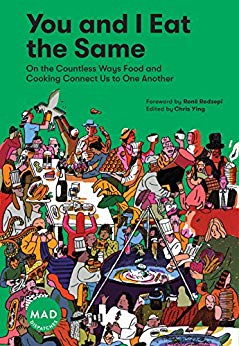 You and I Eat the Same

edited by Chris Ying with a Foreword by Rene Redzepi

What’s the USP? A publication of Rene Redzepi’s MAD nonprofit organisation that’s ‘dedicated to bringing together a global cooking community with an appetite for change’  that collects articles by food writers from around the world exploring the similarities of global cuisines rather than the differences, the more usual subject of food writing.

Why is it good read? Nineteen articles of varying length take a global view of subjects such as the thousand year history of the flatbread, table manners, wrapping food in leaves and husks and how coffee can save lives. Contributors include Redzepi himself on his changing attitude to what constitutes a Nordic ingredient in a piece titled ‘If it does well here, it belongs here’ and renowned journalist and author Wendell Steavenson among many others.

Should I buy it? This is a wide ranging exploration of an important theme in a time when we need to be thinking about what unites us rather than divides us.  Thoughtful foodies will want to give it shelf space.

Buy this book
You and I Eat the Same: 1 (Dispatches)

What’s the USP? A chefs tour across America exploring the country’s diverse immigrant food cultures including stories and recipes.

Who are the authors?  Edward Lee is a Kentucky-based chef and restaurateur known for his progressive take on Southern cooking that incorporates elements from his Korean heritage. He is the author of one previous Smoke and Pickles and was featured on series 3 of the Anthony Bourdain exec-produced PBS show Mind of a Chef.

Why is it good read? Lee spent two years travelling across America to write the book, visiting 16 destinations, some off the beaten path such as Clarksdale, Mississippi and Westport, Connecticut as well as more familiar places including New Orleans and Brooklyn. But where ever he goes, he roots out fascinating stories and unusual recipes (40 of them) such as Nigerian-style beef skewers with cashews, curry and black pepper.

Should I buy it? Lee is an excellent writer and a dedicated researcher (the two go hand in hand). Buttermilk Graffiti, winner of the James Beard Award for Best Book of the Year in Writing, is destined to become a classic of American food writing and an important document of food in America in the early 21st century. If that sounds a little heavy, don’t be put off, Lee is a master storyteller and the book is an absolute pleasure to read. 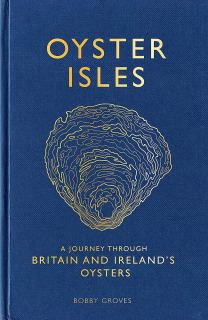 What’s the USP? A tour around Britain and Ireland’s oyster area’s exploring their history, cultural impact and ecological importance and telling the stories of the people who work in them.

Who are the authors?  Bobby Groves is ‘head of oysters’ (great job title) at the glamorous London restaurant Chiltern Firehouse. This is his first book.

Why is it good read? Groves has gone into real depth, travelling the four corners of the country to really crack the shell and get to the meat of his subject.

Should I buy it? The book will be of particular interest to Groves’s fellow professionals in the restaurant industry who buy and serve oysters, but if you are a lover of shellfish and British history then Oyster Isles will be of interest.

Buy this book
Oyster Isles: A Journey Through Britain and Ireland’s Oysters

One thought on “Good food writing”