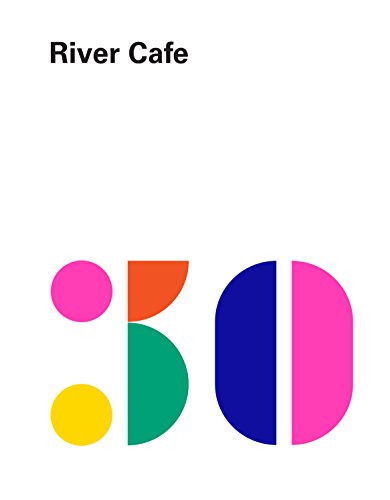 River Cafe 30 commemorates the thirtieth anniversary of one of the most influential restaurants in London. Before Ruth Rogers and Rose Gray opened what was a nine table lunchtime-only canteen for the architects and designers who work in the converted Thames Wharf warehouse in Hammersmith that houses the restaurant, there were only fake trattorias serving generic Italian fare. The River Cafe introduced the notion of regional Italian cooking to the UK; of new season’s olive oil, cavalo nero, Tuscan bread soups, hand made pasta and the infamous flour-less Chocolate Nemesis cake, a recipe that no home cook it seemed could master, me included.

Taken purely as a collection of recipes, there is much to recommend River Cafe 30. This is simple, delicious, ingredient-led food requiring, in most cases, minimal skill from the home cook. If you can’t afford the premier league Italian produce that the restaurant’s reputation stands and falls by, then you’ll still derive a huge amount of pleasure from knocking up dishes like linguine with crab; spinach and ricotta gnocchi and pork cooked in milk. The ‘salsa’ chapter alone could transform your repertoire with killer sauces like bagnet made with capers, anchovies, bread, parsley, garlic, eggs, vinegar and oil.

However, this is not a book for the faint of wallet. The basic pasta recipe requires 13 eggs and that chocolate cake, one of a number of recipes recycled from the restaurant’s famous ‘blue’ cookbook from 1995, calls for well over half a kilo of ‘best quality’ dark chocolate. Follow River Cafe 30 to the letter and you’ll be bankrupt and homeless, although you will have a bit of extra fat to live off before you have to sell your extra virgin olive-oiled body to the night.

River Cafe 30 is a beautiful object with a vivid colour scheme inspired by the restaurant’s bright pink wood-fired oven, yellow pass and blue carpet. There are reproductions of menus drawn or painted on by artist fans that include Cy Twombly, Peter Doig, Damien Hirst and Michael Craig Martin along with evocative black and white photography depicting life in River Cafe’s open kitchen (one of the first in the country) and a moving tribute to the late Rose Gray by Ruth Rogers.

But where is the celebration of the countless chefs that have passed through The River Cafe’s kitchen? Not one word about Jamie Oliver, Hugh Fearnley Whittingstall or Theo Randall, to name but three of the most high profile alumni. Three decades of culinary history are condensed into two brief pages of text plus some architectural drawings, a sample of one of the first menus and an article published in the New Yorker magazine in 1996.

Recipe introductions are sparse with little information about why dishes have been singled out for inclusion, their regional derivation or how they fit into the restaurant’s history. There isn’t even so much as a hint of how to use all those salsas.

Despite high production values, there is more than a whiff of cash-in about River Cafe 30. No doubt it will sell by the bucket load, especially to special occasion diners in search of a memento (River Cafe remains an exceptional place in which to eat your tea), but I can’t help but feel that this is a missed opportunity to properly celebrate one of Britain’s true culinary landmarks.