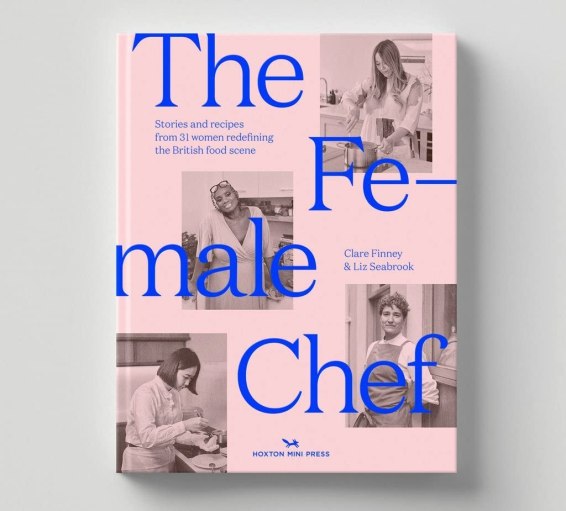 What’s the USP? Interviews with and recipes from 31 leading British chefs/cooks (despite the book’s title, there is much debate in the introduction and the interviews about which is the correct/preferred title) including Angela Hartnett, Thomasina Miers, Andi Oliver, Gizzi Erskine, Ravinder Bhogal, Olia Hercules and er, Elizabeth Haig (click here to catch up on the controversy that has recently sprung up around Haig).

Who wrote it? Food writer Clare Finney won Food Writer of the Year in Fortnum and Mason’s Food and Drink Awards in 2019. She contributes to a wide variety of national publications. This is her first book. Liz Seabrook is a portrait and lifestyle photographer.

Is it good bedtime reading? Finney ponders the question Cooks or Chefs? in her  introductory essay, a question more fraught than you might imagine. Finney says that the words ‘cook’ and ‘chef’ are ‘inherently gendered’ and that ‘several women in this book have chosen to reject the label ‘chef”. However, she also explains that ‘the question ‘Do you consider yourself a chef or a cook?’ continued to prompt an extraordinary array of discussions’. I don’t have room to detail the various viewpoints here but the 30 short interviews (Sam Evans and Shauna Guinn of the now closed Hang Fire Southern Kitchen in Barry are interviewed together) are well worth reading to discover them for yourself.

How annoyingly vague are the recipes? The first recipe in the book is Anna Jones’ Dhal with Crispy Sweet Potato and Quick Coconut Chutney.  Ingredients include ‘2 sweet potatoes’ no size or weight indicated, ‘olive oil for drizzling’,  ‘vegetable or coconut oil for frying’ a ‘thumb-sized piece of ginger’ (my wife’s thumb is roughly half the size of mine) ‘bunch of fresh coriander’ (according to my local Asda, a bunch is either a 30g bag or a ‘growers selection’ which is about three times the size and would be enough coriander for a week’s worth of recipes). There are plenty of other recipes in the book with similarly vague ingredients lists, although with 30 different contributors (Ravinder Bhogal of Jikoni restaurant in London has failed to cough up a recipe for some reason) the accuracy waxes and wanes as you might expect as the recipe writing style varies.

You may say at this point, well, can’t you just use your common sense you annoying (male) pedant. To which I would respond, have a look at these recipes for Pasta Salad by professional chef, baker and YouTuber Brian Lagerstorm which include gram weights for every ingredient including the water and salt to boil the pasta in and all the vegetables (he does specify ‘a splash of olive oil’ to dress the cooked pasta with directly after cooking but I’m going to let him off that one minor detail as it is an instinctive part of the process).  They are just very well developed and written recipes that anyone could follow. Cookery books are manuals and should have the appropriate level of detail. If you bought a woodwork book and it said ‘drill a hole in some bits of wood and screw them together’ you’d quite rightly be pissed off that it didn’t specify the type of wood, size of the hole and the type of screw (that’s a very male example isn’t it. Or is it?).  Recipes are really not that different. Although if you’re cooking up screws and bits of wood I  don’t want to eat at your house.

Will I have difficulty finding the ingredients? With dozens of contributors, all with their own unique styles, the book covers a lot of culinary ground, so it’s not surprising that one or two more difficult to track down ingredients appear in the recipes. Erchen Chang of BAO restaurant in London uses doubangjiang (fermented broad bean paste) for her Braised Pork Gua Bao that’s available in Chinese supermarkets or online at Sous Chef, and Pamela Brunton of Inver in West Scotland pairs Gigha Halibut (which, unless you have a top class fishmonger nearby, you can order from the Fish Society) with coastal greens such as sea blite and sand wort (again, the Fish Society has something similar). Good luck finding tasso ham for Sam Evans and Shauna Guinn’s Shrimp and Tasso File Gumbo though, you might have to make your own.

How often will I cook from the book? There are some recipes, like Angela Hartnett’s Anolini that requires chuck beef, veal rump, Italian sausage, beef brisket, smoked bacon, Toulouse sausage, a free range chicken and much else besides that might be once a year or even once in a lifetime cooks. However, there are plenty of everyday dishes like Skye Gyngell’s Leek, Potato and Parsley Soup and Lisa Goodwin-Allen’s Sundried Tomato and Goat’s Cheese Quiche that make this a genuinely useful book to have on your shelf.

Should I buy it? Eight of the 29 recipes (as mentioned above, Ravinder Bhogal hasn’t contributed a recipe and Sam Evans and Shauna Guinn contribute one between them) have already been published elsewhere so if you already have a large cookbook collection it might be worth checking how many of the recipes you already own if that is your main reason for buying the book.

Finney’s prose can at times tend towards the overheated (for example, of Thomasina Meirs’ Wahaca Mexican restaurant group, she claims that ‘it’s impossible to overstate the impact the chain has had on our culinary landscape’. Um, OK) but she has succeeded in identifying a group of genuinely interesting talents, some of which may be new names to readers or at least under-reported, which makes this a worthwhile purchase for anyone interested in the modern British restaurant scene.