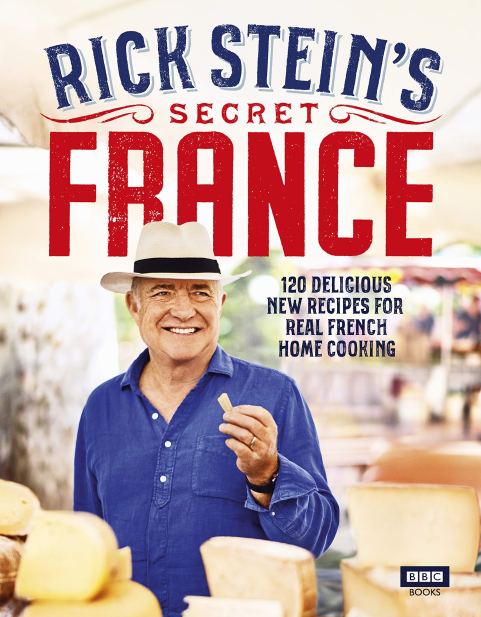 What’s the USP? Restaurateur and seafood expert Rick Stein really needs no introduction. After 25 years on British TV screens and 45 years of running his world famous The Seafood restaurant in Padstow Cornwall, Stein is something of a national treasure. He’s written numerous cookbooks (many of them with an accompanying TV series) about his world travels that include Spain, India, the Med, the Far East, and Mexico. Now he’s returned to France, a country he first wrote and broadcast about 15 years ago with his cookbook and TV series French Odessey. He takes a meandering journey through rural France from Normandy in the north to Provence in the south, making 10 stops along the way including Alsace, Champagne, the Haute Jura and Burgundy

What’s great about it? In addition to the usual suspects like snails in garlic butter,  omelette aux fines herbes, croque monsieur and steak frites, Stein has gone off the beaten track and unearthed pounti, a ham and chard terrine from the Auvergne; wild boar stew with pinot noir from Alsace, and boles de picolat, meatballs flavoured with cinnamon and piment d’Espelette from Prades in the Pyrenees. Food and travel photography by James Murphy is glorious, bringing France to vivid life and making the food look extremely appetising. Introductions to the book, chapters and recipes are informative and Stein’s distinctive voice comes across loud and clear.

Will I have trouble finding the ingredients? There are a few things that you will need to seek out, but there is a very handy suppliers list that will sort you out for most things including Kampot pepper, snails, brik pastry, Banyuls vinegar, and Bockwurst sausage (the latter coming from that obscure vendor Lidl). As you’d expect from Rick Stein, there is a chapter devoted to seafood and you will certainly want to visit a fishmonger for bream, palourde clams, lobster, octopus, brill and scallops (the list goes on).

How often will I cook from the book? Although a few of the recipes will take some planning ahead, there are many that will suit a midweek supermarket-shopped meal such as deep-fried pork chops with parsley; lamb chorba (a very delicious North African stew with chickpeas and orzo pasta that’s flavoured with harissa and ras-el-hanout,  cooked for Stein by an Algerian fisherman in Cassis) and spelt risotto with spring vegetables.

What’s the faff factor? Stein may be a chef, but he’s a self-taught one and generally eschews too much complexity. There are more involved recipes such as The Flavours of Bouillabaisse with Gurnard and Fennel which has a long ingredients list, requires the making of a shellfish stock and the preparation of both confit tomatoes and green pistou sauce, but mostly, the dishes are approachable and very achievable.

Should I buy it? Fans of Rick Stein will not be disappointed with his latest effort. If you are new to the food of France this is a great introduction, and if you are a Francophile, you will enjoy revisiting old favourites and discovering new dishes to add to your repertoire.