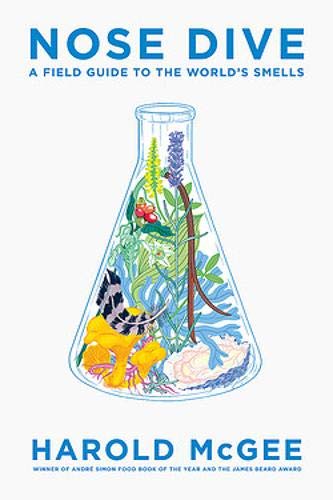 What’s the USP? A deep (nose) dive into the world of smell, exploring what creates the smells around us, and what we can learn from them. From the earliest smells in the universe to thoroughly contemporary stenches, Nose Dive opens up every corner of the sensory world, and takes a big old sniff.

Sounds like a Bill Bryson book…  Harold McGee’s initial premise might recall the bold all-encompassing approach Bryson’s A Short History of Nearly Everything and The Body have taken to their respective subjects, but don’t be fooled. Nose Dive is as academic as it is filled with wonder at the world around us. McGee starts at the very beginning, with early chapters on how chemicals formed in space at the very beginning of the universe, and the sulphurous formation of smells on the newly formed Earth. It’s a neatly chronological approach that the author has apparently used to get his head around the science as he took on what must have been a daunting project, but I found myself longing for some more immediately relatable smells.

Who is the book for? It’s a tough question that I asked myself throughout reading. There is no doubt that McGee has put together a remarkable document on an under-appreciated sense, but little compromise is made for the casual reader. Coming in at just over 600 pages, and unrepentantly scientific in its approach, Nose Dive is not an easy read.

What are you looking to get out of a book on smell? If it’s the nuances in the scent of a good blue cheese, you’ll be wading some five hundred pages in. If you’re excited, however, to learn about why some cat piss smells meaty, and other cat piss displays more distinctly fruity characteristics, then you’ll have a much shorter wait.

Do I have to read it all in order? Not at all – in fact, McGee claims that the book is intended for dipping into at your leisure. A sprawling index means readers inspired by a particular scent are free and able to selectively read around their curiosities. But that does rather beg the question – how many of us are going to smell the unrelenting stench of manure and then both desire and later remember (as presumably nobody will be carrying a 600 page hardback around on the off-chance that their nose asks a question) to look it up, and learn more about concentrated animal feeding operations?

There are useful lessons to learn here for cooks – which makes sense, given the author’s background in food science writing. But too often it feels as though the average reader might only fall upon them by chance. The book gives roughly the same amount of time to food smells (and those immediately associated with food) as it does to everything else – but the result is unnecessarily unwieldy. Perhaps McGee can take all that he has learnt here and create a second volume, focused more tightly on the smells of the kitchen, and what we can learn from them.

Until then, Nose Dive should be filed under ‘Good Intentions’ – a stunningly researched, occasionally insightful title that will appeal mainly to those who are already in the habit of reading lengthy academically-minded science titles.

Shortlisted for the Andre Simon Food and Drink Book Awards 2020. See all the shortlisted books here.