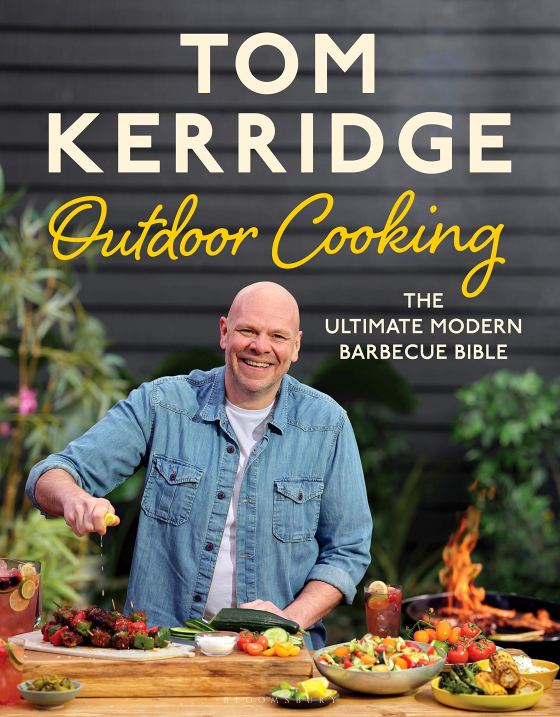 Who wrote it? Chef Tom Kerridge has become known for his dramatic weight loss and series of diet-friendly TV shows and books including Dopamine Diet, Lose Weight and Get Fit, and Lose Weight For Good. His real claim to fame however is as proprietor of The Hand and Flowers pub in Marlow, Buckinghamshire, the only two Michelin starred restaurant in the world. He also runs The Coach, The Shed and The Butcher’s Tap in Marlow, Kerridge’s Bar and Grill in London and The Bull and Bear in Manchester. He is also the founder of the Pub in the Park, a touring food and music festival. Earlier in his career, he worked for such British restaurant luminaries as Gary Rhodes and Stephen Bull in London and David Adlard in Norwich.

Is it good bedtime reading? Well, sort of. There’s a breezy 10 page introduction where Kerridge reminisces about a aubergine he once ate at 3am in Singapore and talks about how we all used to drag woolly mammoths back to our camps back in the day, which is, uh, well it’s certainly something. He also urges his readers to ‘enjoy the process’ of barbecuing which is difficult to argue with, and shares his barbecue tips which include ‘anything goes’, ‘just go for it’ and ‘relax’. Thanks for that Tom.

Will I have trouble finding ingredients? You might need to go to a fishmonger for prawns, squid and scallops that are worth your time barbecuing and a butcher for pheasant, but let’s be honest, you are never going to drag the barbecue out in game season are you? Other than that, there is very little that you won’t be able to find in Asda. They’ve even got gochujang paste for the butter that accompanies Kerridge’s beer can chicken (there is some controversy over this method of cooking, just give it a Google. Kerridge does not address this in the book.)

What’s the faff factor? Let’s set aside the hassle of setting up the barbecue in the first place; if you’ve bought a barbecue book, you must have factored that in already.  There are a few recipes like a seafood platter that’s served with three different flavoured butters that are a bit of work, or a Fennel and ‘Nduja Spiced Porchetta that requires some advanced planning and a bit of skill to execute, but one thing’s for sure, this is Kerridge in approachable mainstream media chef mode rather than a delve into his two Michelin-starred repertoire, you’ll need The Hand and Flowers cookbook for that. For the most part, you’ll find thankfully short ingredient lists and encouragingly straightforward methods.

What will I love? I’m not sure that Outdoor Cooking is the sort of book you fall in love with, but it’s colourful, easy to read and to use. With a little bit of thought and adaptation of the cooking methods (you can figure out how to cook a meatball without resorting to a Kamado Joe can’t you?) you could prepare many of the recipes without going within 10 foot of a barbecue, which may appeal to BBQ-refusing readers (like me.)

What won’t I love? In no sense whatsoever is this anything like approaching an ‘ultimate bible’. What even is an ‘ultimate bible’ other than the worst sort of marketing BS? It’s a cookbook with some recipes.  It’s a good cookbook with some very nice recipes (see below) but it’s not biblical in either proportion, at just 240 pages, or in scope or in ambition. There are just three pages in total on equipment and barbecue cooking technique for example. In a page of thanks at the back of the book, Kerridge marvels that, ‘What we have managed to create in such a short space of time is heroic’ and that he is ‘a fan of not overthinking books’. To be honest, we can tell. There is a feeling of Outdoor Cooking having been put together in fairly short order, but because Kerridge and Absolute are ‘ultimate’ professions, they can get away with it, just about.

Should I buy it? If you are a casual barbecue cook who is looking to go beyond their usual repertoire of bangers and burgers, this book will provide plenty of globetrotting inspiration.