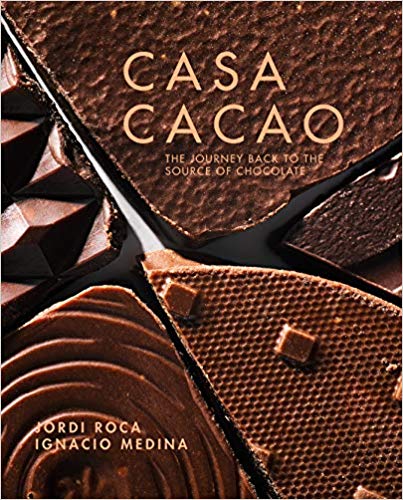 Although it seems to have been around forever, ‘bean to bar’ is a relatively new concept with the first single estate chocolate produced by Cluizel in 1996. That’s just one of many fascinating facts in Jordi Roca’s deep dive into the world of chocolate, written with food journalist Ignacio Medina and inspired by the launch of the three Michelin starred pastry chef’s own brand, Casa Cacao that takes the bean to bar ethos one step further.

Roca argues that ‘chocolate has its beginnings in the tree’, placing increased importance on the variety of cacao, the farmer and the environmental conditions. The book tells the story of Roca trips to Colombia, Peru and Ecuador, visiting cocoa farmers where he discovered that a bean grown in Piura in the northwest of Peru which has ‘fruity and aromatic notes’ is very different from the ‘restraint, elegance and presence’ of beans from Vinces in Ecuador.

With the help of British chocolatier Damien Allsop (‘head of chocolate and bon bon production’ at Roca’s Girona restaurant El Celler de Can Roca), Roca is pushing the conventions of chocolate manufacturing, creating vegetable-based chocolate made, for example, by combining a paste of peas, sugar, isomalt, puffed rice and ascorbic acid with melted cocoa butter. Allsop has also created ‘chocolate²’ made with just cacao and sugar to intensify the purity of flavour. Recipes for both are included, along with a detailed description of the chocolate making process, but you’d need access to a chocolate factory if you wanted to attempt them.

More achievable are ‘chocolate classics’ such as chocolate brownies or sophisticated desserts including milk chocolate, lemon and hazelnut cake, although only the most ambitious pastry chef would consider trying to replicate Mexican Chocolate Anarkia, the recipe for which takes up eight pages of the book.  Also included are some wildly creative savoury recipes such as cacao pulp and spiced chocolate sauce with langoustines by Roca’s brother Joan.

Casa Cacao is a detailed look at a complex and niche subject area and as such will mainly be of interest to chocolatiers and pastry chefs working in a fine dining environment, but it’s a beautifully produced book that will inform and inspire its intended audience.

This review was originally published by The Caterer